Over the last year I’ve been working with pupils in Y7, Y8 and Y10 on a spot of local history. The “Eye: A Castle Connected” project, supported by the Heritage Lottery Fund, English Heritage and Mid Suffolk District Council has involved renovation work at Eye Castle, outreach work with local primary schools and a variety of art, music and ICT workshops here in school. The Y8 and Y10 pupils have been particularly involved throughout the project and have made a significant contribution to the running of workshops, the design and production of resources for primary school children,information boards within the castle grounds anda new smart-phone app which will be available to download in the next month or so.

It really doesn’t seem as if a year has passed since we started the project but the Jubilee celebrations last summer got things off to a fantastic start. Following initial meetings and a site visit with our pupil working group the Art department ran a competition that allowed Y7 to show their skills designing and making bunting that was then used to ‘dress up’ the castle during the festivities. In the Autumn our Art department were again in action, running a workshop that produced resources for a primary school ‘teaching box’.

Pupils studying ICT in Y10 were involved with Bronze Software Labs from Telford on the development of a new Smartphone app that will help visitors to Eye appreciate the castle’s original size and scale in relation to the town. One particular feature to look out for will be a game component of the app, the idea for which came from our Y10 ICT pupils. It guides people around the town and as tasks are completed, rewards are received, which will help people to visualise what the castle would have looked like if it was still standing today. GCSE music pupils have also contributed to the project. A series of workshops were organised with the aim of creating a piece of “new” medieval music to accompany the mobile phone app. They worked with a musician called Myal Pyper – an expert in music from the Middle Ages. The pupils were introduced to bagpipes, a chanter and small pipes.  They then used that experience to write their own music, using modern keyboards but with medieval-style chords. Most recently pupils have provided additional designs for ‘engraving’ on the new gabion basket style seating in the castle grounds which form part of a ‘discovery trail’ for younger children. 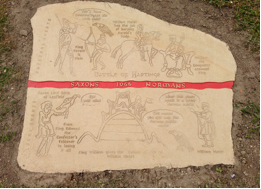 The project culminated for us on Friday 14 June with an open day when the castle grounds were temporarily occupied by a historical re-enactment group and almost the whole of Y7 together with children from local primary schools. It was quite a sight to see five tutor groups striding out towards the medieval heart of the town on an unusually sunny day and then participating in a  variety of workshops demonstrating aspects of ordinary life from the Medieval period; a theme that Y7 pupils have covered within their history lessons.

The whole process has been most rewarding and I hope that everyone who has been involved in whatever capacity will be inspired to take a closer look at the fascinating story of  Eye Castle. The pupils who have been most closely involved  have shown great commitment and without their support we would not have been able to achieve such fantastic results. They have enjoyed a unique opportunity to develop a more detailed understanding of the history of their local community and acquire a range of skills that will help them with their future studies.

A more detailed ‘timeline’ of the project can be found at: https://www.facebook.com/EyeCastle

My name is Richard Miller. I am currently Director of Learning and Head of History at a secondary school in Suffolk, UK. I teach history for pupils aged 11-18. I am particularly interested in teaching more able pupils and looking for innovative and creative approaches to learning and teaching. I use the blog as my reflective journal - the views I share are 'work in progress'!
View all posts by richmiller66 →
This entry was posted in Active History, G&T, History, Local History and tagged Active, Heritage, Local History. Bookmark the permalink.